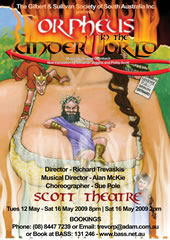 This outrageously funny send-up of the Orpheus myth is Offenbach at his most saucy, effervescent and irreverent.

This Orpheus doesn’t want his wife back – nor she him – until Public Opinion forces him to at least try to retrieve her from Hades. Offenbach lampoons hypocrisy and wowserism, as relevant today as when it was written. Lecherous gods, saucy goddesses, not-so-naïve nymphs and shepherds, and the infernal Can-Can – this is a highly disrespectful romp!

Join us for a night of sparklingly witty music, the new Opera Australia libretto, and a load of fun.