You will not want to miss the fun and nonsense of the Gilbert & Sullivan’s Society of SA’s production of The Mikado.

The award winning production team of Ric Trevaskis (director), Ross Curtis (musical director) and David Lampard (set and costume design) have created a fun, absurd and up tempo production of this wonderfully silly and much loved opera. Re-orchestrated by musical director Ross Curtis, this show will delight all ages with its up-tempo Broadway style approach.

With stunning sets and glorious costumes, the Gilbert & Sullivan Society are sure you will have a great night out.

The Mikado will run at the Scott Theatre (Adelaide University, Kintore Ave) from 20-29 October, with a preview performance on 19 October.

In the town of Titipu a chorus of nobles are joined by Nanki-Poo, who,disguised as a travelling musician, is looking for Yum-Yum, the ward of Ko-Ko. A noble lord, Pish-Tush, asks what Nanki-Poo's business is with Yum-Yum, and learns that the minstrel had seen the girl a year ago when he was a member of the town band, and they had fallen in love. But Yum-Yum was betrothed to her guardian Ko-Ko. However on learning that Ko-Ko was condemned to death for flirting, the minstrel has hurried back to try to claim Yum-Yum. On his return he finds that Ko-Ko has been let out on bail, and appointed Lord High Executioner, and is to be married to Yum-Yum that very day.

Yum-Yum and her sisters, Pitti-Sing and Peep-Bo, appear with their schoolfellows. When Yum-Yum and Nanki-Poo are alone, he reveals that he is the son of the Mikado, and admits she does not love her guardian. The two lovers realise that their cause is hopeless, and Yum-Yum leaves Nanki-Poo who then tries to kill himself. Meanwhile, Ko-Ko learns that the Mikado threatens to abolish the post of Lord High Executioner and reduce Titipu to the rank of a village unless a beheading takes place within a month. On seeing Nanki-Poo about to 'terminate an unendurable existence,' Ko-Ko points out that suicide is a capital offence, and offers to do the job professionally. Nanki-Poo agrees, on the condition that he can marry Yum-Yum and enjoy one month of married life before he is beheaded. After the execution Ko-Ko will then be able to marry the widowed Yum-Yum. Amidst the celebrations Katisha arrives, having tracked down the object of her affections, Nanki-Poo, and threatens to reveal his true identity. But the town dwellers are not to be deterred and 'joy reigns everywhere around.'

Act two opens with Yum-Yum being prepared for her wedding. But she soon learns that under the Mikado's law the widow of a beheaded man must be buried alive. This creates a dilemma, if Nanki-Poo holds Yum-Yum to this marriage, she dies a hideous death, and if he releases her she must marry Ko-Ko at once. Nanki-Poo determines to do away with himself that afternoon unless Ko-Ko will kill him at once. The Mikado and his suite are approaching the town. In desperation Ko-Ko arranges to draw up an affidavit of Nanki-Poo's execution.

The Mikado arrives with Katisha who makes much of being his daughter-in-law-elect. When Ko-Ko presents his certificate of execution, The Mikado reads it and discloses that Koko has beheaded the heir to the throne of Japan. Ko-Ko and Pooh-Bah find Nanki-Poo and beg him to present himself, alive, to his father, thereby absolving them of his death. But Nanki-Poo, now married to Yum-Yum, is afraid of Katisha's wrath, and persuades Ko-Ko to agree to marry the Katisha himself. Katisha, meanwhile, is mourning the death of Nanki-Poo, and when Ko-Ko tries to woo her, she is reluctant, but he wins the formidable lady flattering lies and a sad, lovelorn song. Katisha pleads to the Mikado for everyone to be pardoned. The Mikado, a bit bewildered by it all nonetheless pronounces that 'Nothing could possibly be more satisfactory!'

HOW could The Mikado, a musical written in London in 1885, still be packing them in 126 years later at the Scott Theatre in Adelaide?

Simple!  It’s all about the music.  Great, easily recognised, sing-along tunes that keep on coming.  Happy, melodic pieces, beautifully orchestrated and classy like Mozart or Donizetti, but with English words and ideas that jest and tickle your fancy and amuse.

Directed by Gilbert & Sullivan Society heavyweight Ric Trevaskis, a counsellor in the Family Court by day as well as a talented impresario and singer, this Mikado is a musical triumph.

Take along a young friend or relation and hopefully spark an interest in light opera that could be the foundation for appreciating the sublime world of opera music – a gift that goes on giving. Or just get to it yourself and have fun enjoying the work.

Music director Ross Curtis – who enjoys Handel for breakfast, brass choirs at lunch and Sting at night – has re-engineered the music with a groovy modern combo which rocks along with excellent keyboard work, bass guitar, a violin, flute, clarinet, brass and drums.

The Mikado, like all G&S, relies on brilliant interplay between the lead singers and the chorus or choruses.  There is even a terrific madrigal – a piece for four voices in an ancient merry style that really works.

Star of the show is David Lampard (also production designer), whose Ko Ko was lively, funny, well-sung – and he’s a great hoofer, too.

The three little maids from school blasted their way into the operetta with a brilliant intro song, and their lively, funny dancing and great singing  throughout was a perfect balance to the more formal male chorus.  Liana Nagy (an adorable Yum Yum), her sister Sarah Nagy and Natalie Tate were the three sisters – all of whom shone throughout.

There are lots of great moments.  “He’s got a little list” was appropriately updated: if you’ve a mobile phone with all the apps, or a master-chef enthusiast or a gay marriage activist – she’ll be on the list – and none of ’em be missed.

The show kicked off with a ukulele-backed and very cute “Over the Rainbow” and then the curtain went up on a simply beautiful set of a huge rising red sun with a Japanese motif against it.  Excellent!

The Mikado is playing at the Scott Theatre, in Kintore Avenue, until October 29. Performances tomorrow at 2pm and 8pm, then October 26-29 at 8pm and October 29 at 2pm. 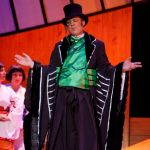 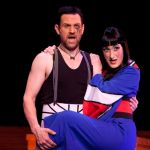 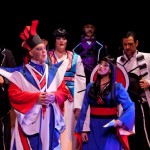 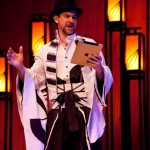 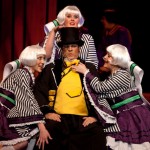 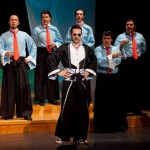 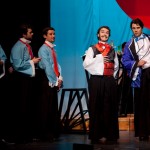 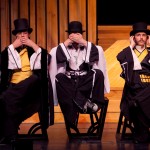 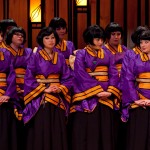 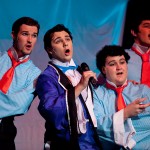 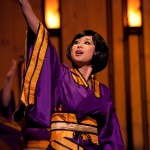 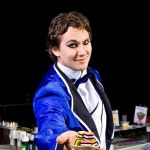 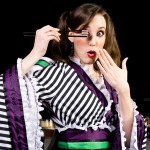 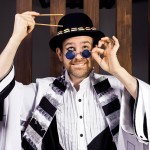 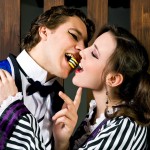 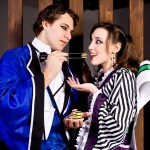 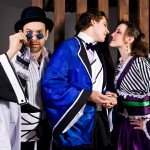 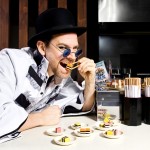